From the CD "One Last Look" (memories of the Pasminco Smelter) 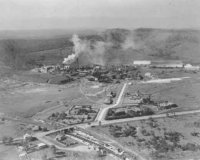 Pasminco Smelter was located at the northern end of Lake Macquarie near Newcastle New South Wales and it covers an area of approximately 190 hectares. The plant has had various names and owners over its 106 years of operation. Building work started 1896 and the first attempts to refine Zinc began in 1897 and was abandoned shortly after due to technical difficulties, (this process was known as the ASHCROFT process).

The plant was subsequently adapted to smelt lead using blast furnace technology.  Over the years the sulphide plant produced vast quantities of Zinc, Lead and Sulphuric acid these being the primary materials used in the production of every day products. This plant was the Hunter regions first major industrial site and its operation contributed greatly to the Economic growth of New South Wales and Australia It employed about10,000 people in its lifetime and had various names changes and owners, but has always been “The Sulphide”.

It endured two World Wars, The Great Depression, world market fluctuations technology breakthroughs and environmental concerns. Other materials were produced to fill the need such as Cement, Superphosphate and compotes for explosive manufacture for the War effort. No story of the Sulphide Works would be complete without mentioning the people (Employees), who managed and operated the numerous processes. The plant would not have been able to achieve its enviable record.  The hardship of the early times was counteracted by the mateship and camaraderie that existed in this plant.

When I was Acid Plant Superintendent, I got a call to get to the D Plant Portacom as soon as I could. There was Grahame Ford and Dale Jackaman sitting there, and Grahame said “Come over here.” Suddenly a six foot carpet snake came rearing at my face! Grahame and Dale were killing themselves laughing. Turns out that Dale used to keep snakes and Grahame had brought this one in for him (Grahame’s brother worked at a banana plantation and came across them quite often). After this episode, there was a rubber snake everywhere – peaking through doorways, coming around the end of corridors. And of course, you never really knew if it was real or not!

We used to have a crane driver up in the machine shop called Tony Keemore. He was a bit of a shit-stirrer our Tony. One day he made up some little boxes, put some lenses on them, and placed the boxes up in the rafters of the machine shop. One just happened to be looking down on Glen Skelton’s bora, and the other one was down a bit further, and facing down in the boiler shop. Anyway the next morning he happened to be walking along the floor, and he saw Col Caddy and Glen Skelton talking. Col and Glen used to get there early of a morning to do the crossword puzzle together. Tony walked up to the both of them and said “ Gee, they’re bastards!” Col said “What?” “Oh, they’ve installed some cameras – don’t look up, but they’re up in the rafters. If you look very slowly to your left up there, you can see them.”

With that, Col Caddy, who wasn’t known for his temper, exploded with rage. Tony threw some more acid on, by explaining that the cameras had actually been there for a few days! The word filtered around, and things got more hairy when they discovered the one looking down on the boiler shop, and it had been shining down on the union delegate at the time, Alan Harris. So everyone was wanting to go on strike because of these flamin’ cameras! Tony really got them that time.

The Newcastle Industrial Heritage Association seeks to preserve the memories and historically significant buildings, as a legacy of the areas past working history. This plant closed on 12th September 2003 and is ready for demolition after 106 years of operation. So its stories of working years needs to be told. A.Murphy