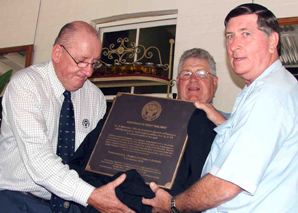 The attached photo was taken by Chris Walters, the editor of Railway Digest magazine.
Tim Fischer handing over the plaque,to NIHA President Bob Cook with our friend from ARHS (Australian Railway Historical Society) Spencer Ross, who organised to have the plaque made and delivered to us.
Mr Fischer arrived with the Plaque in Newcastle on the 19th November,on the "Newcastle Flyer" the 3801 Steam Train.

Newcastle Industrial Heritage Association and other historical and heritage groups have worked together to present a formal ceremony, at the recently discovered location of the end of the railway, which will demonstrate Newcastle’s important role in our Nation’s development.

The ceremony will consist of an exhibition, a series of speakers and unveiling of a bronze plaque.

• Bryce Gaudry - Member for Newcastle will open the event.

• Peter Sherlock - from Surveying firm Monteath & Powys will describe the research and technology used to locate the railway.

• Pennie Pemberton - Archivist for the Australian National University in Canberra, who hold the AA Company records dating back to 1824, will speak on the AA Co.’s early role in Newcastle’s development.

• Keith Powell – representing Newcastle Port Corporation will talk on the significance of the 1831 event to the development of the Port of Newcastle.

• Tim Fischer - (Ex-deputy Prime Minister, currently a director of the Australian Agricultural Company), will speak on behalf of the AA Company, who provided the plaque.

• Cr John Tate - Lord Mayor of Newcastle will speak and unveil the plaque.

All members of the community are invited to attend the ceremony, which will